If you've only just heard of Pickleball, you're not alone - it has seen a huge growth in popularity in a short amount of time. Our guide will get you up to speed with everything you need to know, and maybe convince you to give this fun sport a try!

Any great chef will tell you a delicious meal starts with great recipes. Since pickleball is taking the country by storm, it is perceived as delicious activity. The recipe for pickleball can be seen as two parts tennis, one part ping pong, and a pinch of badminton. When combined they create a meal to be shared with one or three of your guests resulting in great fun and social interaction.

Is Pickleball Easier than Tennis?

Just like with food, it is a matter of taste as to which is easier. There are a couple of differences that could affect your opinion:

Court Size - to be sure the significantly smaller court and easier to hit ball make pickleball physically easier to play for more people at a wider range of ages and conditioning levels. Both sports can be played as either a one on one (singles) competition or a two on two (doubles) competition. Because the pickleball court is smaller, doubles is especially easy to play as it does not require nearly as much movement as tennis.

Racquet vs. Paddle - tennis racquets are larger and longer than pickleball paddles and generate more power much easier. Both require some degree of hand-eye coordination but the shorter paddle is generally conceded to be easier to use sooner in the learning curve than a tennis racquet. This shorter paddle also allows quicker skill building for both forehand and backhand shots.

Net - both games require the use of a net, however, the pickleball net is lower across the entire court. Both use a right and left box as the targets for alternating serves.

Ball Type & Speed - the balls used in each sport significantly impact play. A tennis ball is hit with much greater velocity. Tennis serves have been clocked at over 160 mph at the highest level of professional player with the typical pro routinely hitting 120 mph serves. The pickleball moves at about one third the pace of a tennis ball. Outdoors, it is also more vulnerable to wind gusts because of its much lighter construction, hollow middle, and holes.

Since the court is small, reaction times when players are volleying need to be sharp. Even though the ball is only traveling at 30-40 mph, players volleying the ball back and forth must react to the ball in approximately a quarter of a second.

Other sports have peak speeds much higher than pickleball that peaks out somewhere around 50 mph. 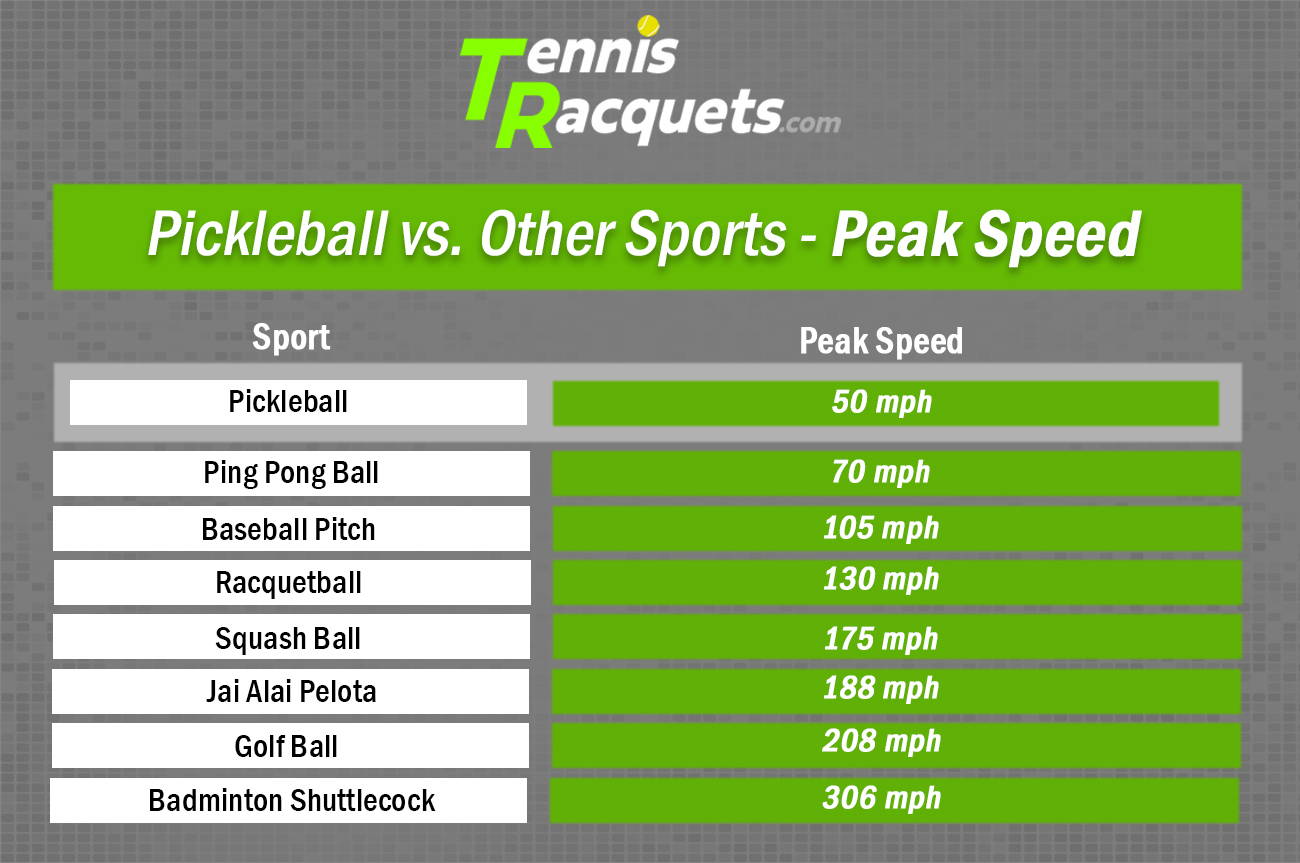 As we mentioned at the beginning, the Pickleball recipe wouldn't be complete with adding in some Badminton an Ping Pong ingredients. How do these two sport influence Pickleball?

Badminton & Pickleball - both are played on a court the size of a doubles badminton game. The dimensions are 44 feet long by 20 feet wide. The service boxes are slightly different sizes, however.

Ping Pong & Pickleball - both sports are played with paddles but the ping pong paddle is very different in terms of construction, materials, ability to generate spin and certainly size. Since ping pong paddles usually have a cushioned surface they create much more spin and drive the ping pong ball at a much higher speed.

The games are also very different not just in terms of the height of the net and the use of a table. Specifically, in pickleball a significant number of shots are played by volleying the ball before it hits the ground. In ping pong however, the ball must be allowed to bounce before making contact.

Join in the Pickleball Fun!

There must be a reason for the rapid growth in pickleball. The ease of learning the game combined with the low costs makes for a tasty activity. Check out our Learning Center for great advice. Look to TennisRacquets.com to have a huge supply of paddles to choose from. With a great selection of balls, bags, and shoes, you can be a player in this sport in no time.

Want to get started with Pickleball?
Learn everything you need to know to get on the court!

Guide to Getting Started with Pickleball